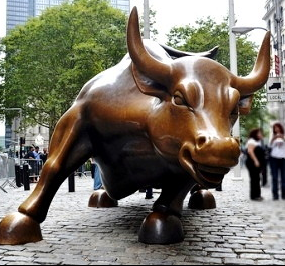 Bowling Green is New York City’s oldest park and is deeply rooted in New York City history. It’s a small public park in the Financial District of Lower Manhattan, New York City, at the southern end of Broadway, next to the site of the original Dutch fort of New Amsterdam. According to tradition, this spot served as the council ground for Native American tribes, as well as a parade field and cattle market, where people would sell and buy livestock for their farms, and was the site of the legendary sale of Manhattan to Peter Minuit in 1626.

The Dutch called the area “the Plain” and it marked the beginning of Heere Staat (High Street, now Broadway)—a trade route which extended north through Manhattan and the Bronx. In 1686, the site was designated as public property, when the City Charter put all “waste, vacant, unpatented and unappropriated lands” under municipal domain.

As for the history, the NYC Department of Parks writes that, on April 27, 1686, Governor Thomas Dongan granted the Dongan Charter of the City of New York. Part of this early city charter officially put all “waste, vacant, unpatented and unappropriated lands” for the first time in municipal care, under the jurisdiction of the Common Council. Bowling Green served as an informal communal ground until the 1740s, when the Common Council — the area’s governing body — offered the land for rent at the “cost of one peppercorn per year.”

The site was designated a park in 1733, originally including an actual bowling green (a venue for lawn bowling), and is surrounded by its original 18th-century fence. The iconic Charging Bull sculpture is exhibited on its northern end. Three lessees, landlords John Chambers, Peter Bayard, and Peter Jay, were responsible for developing it into “the delight of the Inhabitants of the City” with trees, walking paths and a bowling green.

On August 21, 1770, the British government erected a 4,000 pound (1,800 kg) gilded lead equestrian statue of King George III in Bowling Green. With the rapid deterioration of relations with the “mother country” after 1770, the statue became a magnet for the Bowling Green protests, and in 1773, the city passed an anti-graffiti and anti-desecration law to counter vandalism against the monument, and a protective cast-iron fence, which still stands as the oldest fence in New York, was built along the perimeter of the park.

On July 9, 1776, after the Declaration of Independence was read to Washington‘s troops at the current site of City Hall, local Sons of Liberty rushed down Broadway to Bowling Green and toppled the statue of King George III.  The event is one of the most enduring images in the city’s history. According to folklore, the statue was chopped up and shipped to a Connecticut foundry under the direction of Oliver Wolcott to be made into 42,088 patriot bullets at 20 bullets per pound (2,104.4 pounds).

The park suffered neglect after World War II, but was restored by the city in the 1970s and is now one of the most heavily traveled plazas in the city. The Bowling Green Fence and Park were listed on the U.S. National Register of Historic Places in 1980.

In 1982, the Irish Institute of New York installed a plaque in Bowling Green park commemorating an important religious liberty challenge which occurred in Manhattan. Reverend Francis Makemie, the founder of American Presbyterianism, challenged the edict of Lord Cornbury by preaching at the home of William Jackson near by the Park. He was arrested and charged with preaching a “pernicious doctrine”, but later acquitted.

In 1989, the sculpture Charging Bull by Arturo Di Modica was installed at the northern tip of the park by the New York City Department of Parks and Recreation after it had been confiscated by the police following its illegal installation on Wall Street. The sculpture has become one of the beloved and recognizable landmarks of the Financial District.

In March 2017, Bowling Green was co-named Evacuation Day Plaza, which was marked by the erection of an illuminated street sign, commemorating the location of a pivotal event in the American Revolutionary War that ended a brutal 7-year occupation by British troops. On November 25, 1783, after a U.S. soldier managed to rip down the British flag at Bowling Green and replace it with the Stars and Stripes — an apparently tough feat since the British had previously greased the flag pole. As the British boarded ships back to England, then-General George Washington triumphantly led the Continental Army through Manhattan down to Bowling Green and witness the last British troops sailing away from Lower Manhattan.

In 2017, another bronze sculpture, Fearless Girl, was installed across from the bull. Designed by sculptor Kristen Visbal, the work was hailed for its feminist message. The ‘Fearless Girl’ statue, which was commissioned by State Street Global Advisors as a way to call attention to the gender pay gap and a lack of women on corporate financial sector boards, was installed on March 7, 2017. The statue depicts a defiant little girl posing as an affront to and staring down Charging Bull. The statue was initially scheduled to be removed April 2, 2017, but was later extended to remain in place until further notice.

Info taken by NYC-Gov-Parks and Wikipedia